Not everyone is Jon Bonjovi!

Three weeks out due to work, family etc and finally I'm back on the training ground. It feels good to lace up the boots and head to the field where everyone is already all geared up.

As usual, I arrived late coz the 3 little tykes, all decked out in full Arsenal regalia, were busy playing amongst themselves enroute to the car, blissfully unaware that daddy is late for training.

I hate being late for football. Anyone who knows me can vouch for that. Which also means I have a low tolerance for players who are tardy... But I digress. 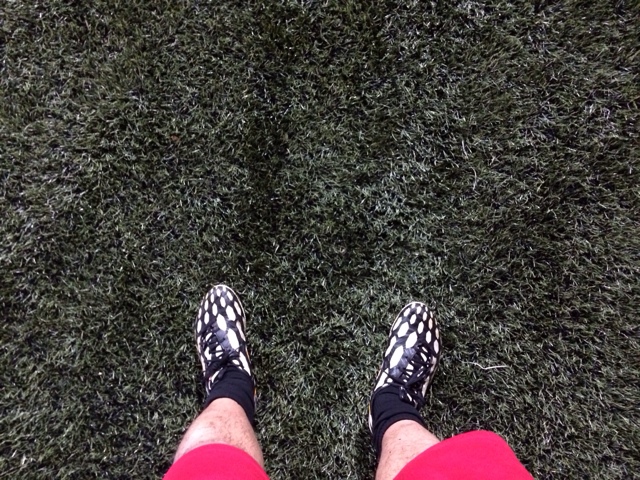 I belong here. On the turf. In my boots.

Towards the last half hour of training, we played a 2-sided game. My side scored an early goal and the other side promptly threw everything into attack. By everything, I mean everyone suddenly thought they were Singapore's answer to Ronaldo and tried to take on my entire defence on their own.

I was a little off my usual game as well. My judgement was off, my timing was off, and obviously my fitness wasn't where it was supposed to be. I almost took out a player who was bearing down on goal because my mind moved faster than my body could. Good thing the 2 of us only ended up with bruises and nothing too serious.

My team could have easily been out-scored. But the opposition seemed hell bent on scoring via a Messi-esque dribble.

He was playing GK for the other team and could see how the entire team turned individualists as the game wore on.

As we sat down after the game for our customary static work outs, Coach sat on a ball, looking pensively at us before sharing his observations.

"Guys, I am not happy with some of you today," said the RM coach.

"This is a problem I notice with many players. Especially the younger ones.

"Everybody wants to be the singer. But most of us are better in a choir. Singing together.

"I am angry. Because I don't like to lose. Never be happy to lose. Even in training. When we're losing, we must play harder, play together. Play as a team.

"I see players getting the ball and trying to beat 2, 3, 4 players. Why are you not passing the ball? That is not being a good player! I don't want these players in my team because they don't play as a team!

"It's a good thing this is an academy and not my team otherwise many of you will not be here next week!

"We must learn to pass. To look for our teammates. To attack together and defend together."

Coach singled out a few players, who incidentally were all under 20.

"You, when we were defending you did not come back. But you were not tired because when the ball was going forward, you were running very fast!

"And you, your Real Madrid jersey is not even original...

"Everyone wants to be the striker. But to be a striker, you have to be on another level from your teammates! You must have good technique, good control, can shield from the defenders and run into good positions.

"For many of you, playing defender or midfielder is better because you have more time on the ball and you can look around for passing options."

He then pointed at a quiet, unassuming trainee in a blue jersey.

"In my opinion, he is the man of the match. Because he did not lose the ball. He was playing right midfield, which is not his natural position because he usually plays in defence. But the coach tells him to play midfield, and he played.

"He did not do anything spectacular. He did not score any goals. But he was dependable. He passed quickly and accurately. He tackled when people came his way. He played for the team. Not himself. To me, he's the real MVP."

How often have we seen a team disintegrate into a collection of individualists when the going gets tough? Everyone loves to be The Person who single-handedly saves the team with his individual brilliance.

But most of us are not Bonjovi. We cannot sell-out a 100,000 capacity stadium just by turning up, nor sell millions of albums of our singing a collection of songs.

But what we can do is sing in a choir and as a group, we will sound better, with a better range of singing and become more effective performers.

Boonadine Limdane
Been writing for a while now. Thought of getting a space to store all my precious thoughts and ramblings...